Most evangelicals and members of historically black Protestant churches say congregations should discuss social and political issues, although every other major religious group in the U.S. wants their religious leaders to keep quiet on politics, according to a new Pew Research Center survey.

The poll of 6,364 U.S. adults asked if churches and other houses of worship should “keep out of political matters” or “express their views on day-to-day social and political questions.”

Members of other religious groups, though, say churches and houses of worship should keep out of political matters. This includes 63 percent of mainline Protestants, 62 percent of Catholics and 69 percent of Jewish adults.

“Protestants in the evangelical and historically black traditions are the only major U.S. religious groups in which more people say churches should express their social and political views,” Pew said in an online analysis. 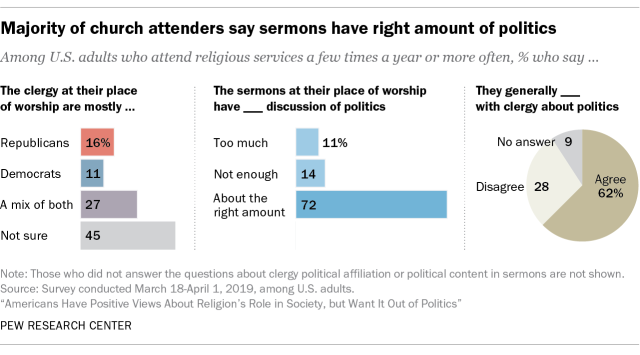 TobyMac's Son Died from Accidental Overdose Truett Foster Says | Christian News Update A representative for TobyMac and his family has revealed the official cause of death for the Christian singer’s oldest son, Truett Foster McKeehan. According to People magazine, a...

Tony Evans: My Wife Saw A Glimpse of Heaven before She Died

Tony Evans: My Wife Saw A Glimpse of Heaven before She Died | Christians News Update Pastor Tony Evans recently shared that just before his wife died, she told her family she saw “something outside earth’s realm.” According to CBN News, the family had gathered around...