One Man Slain, Children and Others Kidnapped in North-Central Nigeria

One Man Slain, Children and Others Kidnapped in North-Central Nigeria 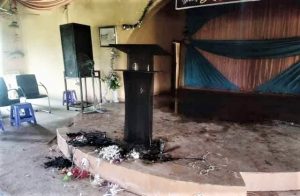 More than 20 herdsmen rode into Damba Kasaya village, Kaduna state, on motorcycles at about 8 a.m. in an attack in which they kidnapped four students, including a 10-year-old girl, from a school.

Local news reports said Auta was killed while pursuing the fleeing herdsmen, but Aruwa said they killed him in his house, which is close to the school where the students were kidnapped. The herdsmen abducted seven Christians from the village in Chikun County, he said.

“Among them were four students of Prince Academy and one of their teachers,” Aruwa said. “Two other Christian farmers, a woman and a man, were captured and taken away too by the herdsmen.”

In the same county’s Damishi village, herdsmen reportedly abducted six Christians on Saturday (Aug. 22) from a hotel where they had taken refuge after Fulani herdsmen attacked their village. Two of the six kidnapped were women nursing babies.

On Saturday (Aug. 22) in Kakura village, in the Kajuma area also in Chikun County, Muslim Fulani herdsmen reportedly kidnapped an Anglican priest and his 10-year-old son. The Rev. Meshach Luka of the Anglican Diocese of Kaduna and his son were kidnapped from his station at Kakura II Kujama Missionary Archdeaconry.

They were freed on Monday (Aug. 24), according to the Hausa Christians Foundation, without providing details of their release.

The assaults were the latest in an acceleration of herdsmen attacks this year in Kaduna state. More than 50,000 Christians have been displaced from 109 villages now occupied by armed Fulani herdsmen in Kachia, Kajuru, Chikun and Kaura counties, all in southern Kaduna state, according to Luka Binnayat Southern Kaduna People’s Union (SOKAPU).

The post One Man Slain, Children and Others Kidnapped in North-Central Nigeria appeared first on Morningstar News.