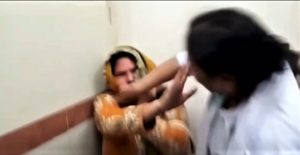 LAHORE, Pakistan (Morning Star News) – Staff members of a hospital in Karachi on Thursday (Jan. 28) slapped, beat and locked a nurse in a room after baselessly accusing her of blaspheming Islam, sources said.

In a video circulating on social media that a hospital staff member recorded of the attack, 42-year-old nurse Tabeeta Nazir Gill, who is also a locally popular gospel singer, is seen crying for help as Muslim hospital personnel slap and punch her, and in one clip they thrust a notebook and pen into her hands to try to force her to sign a confession.

They call for her to “confess your crime in writing” amid a din of accusations and curses, and a staff member strikes her with a broom.

“I swear to God I haven’t said anything against the prophet [Muhammad],” Nazir says in the video clip. “They are trying to trap me in a fake charge.”

Staff members at the Sobhraj Maternity Hospital where Nazir Gill has worked for nine years locked her in a room after trying to force her to sign the confession, sources told Morning Star News.

“Fortunately, someone called the police, and they promptly arrived on the scene and saved her life,” said Pastor Eric Sahotra, who was among the first to reach the police station after officers took Nazir Gill in for questioning. “News of the incident spread quickly through the social media, raising fears of mob violence outside the hospital and other areas.”

After investigating, officers at the Araambagh police station found no evidence to support the blasphemy allegation against the Christian nurse, Pastor Sahotra said.

“A Muslim colleague made the false accusation due to a personal grudge,” he told Morning Star News. “Other hospital employees were misled into believing the allegation, so they also attacked Tabeeta.”

Hospital administrators told police that there had been no complaints of blasphemy against Nazir Gill, and that it was clear a co-worker had falsely accused her, he added.

“The police handled the case wisely, otherwise our Christian sister’s life would have been destroyed if she was charged under the blasphemy law,” Pastor Sahotra said, adding that she has two young children “who are in a state of shock since the time they saw the graphic video of their mother’s beating.”

Police allowed Nazir Gill to return home in the evening after clearing her of the accusations, but the gospel singer is now forced to spend nights away from her house due to security fears, sources said. Morning Star News attempts to contact her were unsuccessful.

Police have formed a committee to investigate, but at this writing no legal action had been taken against the Muslim nurse who instigated staff members to attack Nasir Gill.

In Pakistan, false accusations of blasphemy are common and often motivated by personal vendettas or religious hatred. Accusations are highly inflammatory and have the potential to spark mob lynchings, vigilante murders and mass protests.

Many of those accused of blasphemy never reach the courtroom; violence has killed 62 accused people since 1990, with few prosecutions. Lawyers defending those charged with blasphemy, presiding judges, and individuals speaking against the law are also targeted.

With no presumption of innocence in Pakistan, anyone accused of blasphemy can be jailed, often for years, while false allegations go unpunished. In 2018, a Senate Special Committee on Human Rights and the Islamabad High Court had recommended that those making false blasphemy accusations be given the same punishments as those for blasphemy convictions, but the government dismissed the recommendation. The recommendation also stated that anyone registering a blasphemy case at a police station must bring two witnesses.

The punishment for blasphemy in Pakistan ranges from several years in prison to death. By contrast, a person making a false accusation faces potential punishment of six months in prison or a fine of only 1,000 rupees (US$6). Although successive governments have acknowledged that the blasphemy laws are blatantly misused, little effort has been made to stop the abuses.

Rights activists say it’s unlikely that any government will move to repeal or amend the blasphemy laws due to the fierce Islamic religious sentiments in the Muslim majority country. They say Pakistani authorities must be urged to immediately implement effective procedural and institutional safeguards at the investigative, prosecutorial and judicial levels to prevent abuse of these laws.

The U.S. State Department on Dec. 7 re-designated Pakistan among nine other “Countries of Particular Concern” for severe violations of religious freedom. Previously Pakistan had been added to the list on Nov. 28, 2018. The other countries on the list are Burma, China, North Korea, Eritrea, Iran, Nigeria, Saudi Arabia, Tajikistan and Turkmenistan. Sudan and Uzbekistan were removed from the department’s Special Watch List due to improvements in their religious rights records.