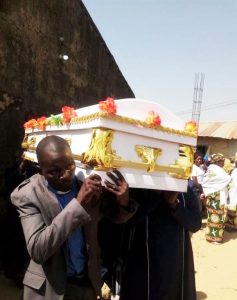 (Morning Star News) – Renowned French film-maker, journalist and philosopher Bernard-Henri Levy, hardly a right-wing “Islamophobe,” is among those who have made reports that indicate funding from Islamist organizations abroad is behind the radicalization of mosques in Nigeria.

Radical mosques and Islamic schools (madrassas) contribute to the kind of violence perpetrated by Fulani herdsmen, leading to the well-founded fear of slaughter that many Christian villagers in north-central Nigeria experience each night.

“Such fear is hardly ‘phobic.’ It indicates a very real and increasing danger that cannot be overlooked,” writes Lela Gilbert, senior fellow for religious freedom at the Family Research Council, in a recent report. “And such danger should not be ignored by those who have the power and means to confront and contest it.”

In her report, “The Crisis of Christian Persecution in Nigeria,” Gilbert notes that international media contribute to the ignorance of the ongoing slaughters in Nigeria among people in the United States.

“Because many reporters and others in the media often operate from a secularist worldview, religious concerns are frequently overlooked by ill-informed commentators and analysts,” she reports. “Worse yet, far too many incidents remain unreported altogether. This lack of reporting is occurring while one of the 21st century’s worst atrocities unfolds.”

Gilbert calls for the creation of a U.S. Special Envoy for Nigeria who could consistently document violence in the country.

“Standardized templates for reporting need to be developed and training provided so that facts appear in a consistent format – documenting attacks, deaths, arson, kidnappings, rapes, property destruction, and whatever information is deemed relevant,” she reports. “Once such information is made known, it will be more difficult for the U.S. Embassy, ambassadors, and other American representatives who serve in West Africa – not to mention Foggy Bottom – to ignore it.”

Hard-hitting sanctions against Nigerian President Muhammadu Buhari and officials doing his bidding are essential and appropriate, she says.

“The Global Magnitsky Act and other religious freedom and human rights tools offer significant options that can help move these concerns from talk to positive action,” Gilbert says. “Cuts in foreign aid should also be under consideration.”

The decades of horrific bloodshed that Christian farmers have suffered at the hands of Muslim cattle herders in Nigeria has reached a new level, and it’s threatening to turn into civil war within a few years.

While mainstream media continue to ignore the burgeoning genocide or perpetuate the false narrative that the violence is “tit-for-tat” guerrilla hits between Christian tribes and Muslim tribes fighting over land, herdsmen attacks increasingly take the form of terrorist strikes designed to instill fear.

Armed with sophisticated weapons, Muslim Fulani herdsmen in Nigeria’s Middle Belt attack the homes of predominantly Christian villages in late-night raids to slaughter parents, children and grandparents before they can get out of their beds. They dismember, slash throats or stab Christians with machetes and spray them with the gunfire of AK-47s. They purposely leave some villagers alive to spread word of the terror.

Christian farmers have neither the means nor the access to obtain arms, and legally neither group is allowed to possess them. The herdsmen have long had resources to buy high-powered weapons, and that capacity appears to be increasing. The herdsmen appear to be obtaining their sophisticated weapons from Islamic extremist terrorist groups or corrupt Muslim Nigerian soldiers. Kidnappings are more frequent, indicating they are obtaining ransom money to pay for the arms.

Christians in both central and northern areas of Nigeria are convinced that week after week of uncontested attacks could not be happening without the collusion or involvement of corrupt Nigerian police, military and government officials. They refer to the government itself as attacking them. They feel utterly defenseless, and their occasional retaliatory attacks then feed the mainstream media narrative that the violence stems from sectarian conflict over scarce resources.

“The attacks have, on occasion, led to retaliatory violence, as communities conclude that they can no longer rely on the government for protection or justice,” Baroness Caroline Cox of Humanitarian Aid Relief Trust recently wrote. “However, we have seen no evidence of comparability of scale or equivalence of atrocities.”

Cox notes that researchers report more military capability and Islamist fervor among the herdsmen than in past years. Fulanis may seize Christian farmers’ land for their cattle, but their jihadist cries of “Allahu Akbar” (“God is greater”) and the level of terror inflicted points to equally fundamental religious motives.

“Growing numbers of Fulani have adopted a new land-grabbing policy – motivated by an extremist belief system and equipped with sophisticated weaponry – which has led to the massacre of thousands of people and to the permanent displacement of vulnerable rural communities,” Baroness Cox wrote.

While mainstream media continue to parrot weakly supported assertions by governmental and watchdog groups that violence in Nigeria amounts to tit-for-tat fights over land, Aid to the Church in Need (ACN) was one of several organizations that recently informed the United Kingdom’s All-Party Parliamentary Group for International Freedom of Religion or Belief (APPG) of the fundamental religious motives behind Islamist attacks.

“While not necessarily sharing Boko Haram’s vision of a Muslim caliphate in northern Nigeria, the evidence suggests the Fulani herdsmen are as committed as Daesh [Islamic State] affiliates to eliminating Christians in a region where the church has grown fast,” the ACN told APPG officials.

Likewise, the Nigeria-based Stefanos Foundation told the APPG, “the violence is primarily for Islamic territorial expansion and the advancement of Sharia (Islamic law)… the perpetrators of the violence are Muslim extremists who cannot submit to any other law apart from Islamic law.”

The Nigerian government has largely ignored complaints by church leaders in the country and by international human rights organizations that the administration has done virtually nothing to stop the carnage. In President Buhari’s public comments, he dismisses the violence as “sectarian” or “communal” conflict between herdsmen tribes and farming tribes, and Nigerian journalists are under government pressure to perpetuate the false narrative; they routinely describe unprovoked, uncontested violence by Muslim Fulani herdsmen as attacks by “bandits.”

By denying the religious motives of one-sided attacks, Buhari is trying to prevent fervor that could lead to civil war, but Christian leaders in Nigeria warn that very outcome will result from failing to rein in assaults by herdsmen, increasingly called “Fulani militia.” Fears are growing that, like Boko Haram, the Muslim Fulani herdsmen have the same agenda of inciting a civil war that would attract greater funding from Islamist regimes abroad for the establishment of Islamic law nationwide.