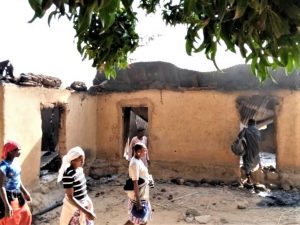 Muslim Fulani herdsmen ambushed the four members of the Evangelical Church Winning All (ECWA) at about 8 p.m. in Kwall District, Bassa County of Plateau state, three of them near Ri-Bakwa village and one in Zirshe village, according to David Mali, spokesman for the Irigwe Development Association (IDA). The IDA unites the predominantly Christian, ethnic Irigwe of Plateau state.

“Irigwe nation has again been thrown into the state of grief, heart-brokenness following the unwarranted killing of four of our Christian men by the Fulani herdsmen at two villages of Kwall District, Bassa LGA of Plateau state,” Mali said in a press statement. “Four of them from Rikwe-Chongu village were ambushed along Ri-Bakwa axis near Kpachudu, and three were killed instantly while one sustained gunshot injury. The other one from Zirshe (Ntireku) was ambushed and killed instantly.”

The herdsmen burned several houses and food grains worth millions of naira in Zirshe village, he said.

“Irigwe nation is our land, and no amount of evil force can compel us to relinquish it to those who hate us and our Christian faith,” Mali said. “We are known for resilience, and so we shall remain till the end of age.”

Such unprovoked violence must be stopped, and the Christian Irigwe’s decision to be a peace-loving people who will not retaliate should not be taken as an act of cowardice, Mali said.

“In the same vein, we want to call with a high tone on the authorities saddled with the responsibility of protecting lives and property to step up efforts in ensuring that the needful is done in terms of apprehending the culprits and absolute justice served, so as to put an end to all manners of destruction of lives and property within Irigwe nation,” he said.

The killings followed a Feb. 7 Fulani herdsmen attack on Christians in the villages of Kishosho and Zirshe in southern Kaduna state’s Kauru County, Mali said. Church elder Danlami Sunday, 40, and four other Christians were killed, he said. There are villages called Zirshe in both Kaduna state and Plateau state.

“This attack occurred around 7:30 p.m. of Sunday, Feb. 7, where Fulani Herdsmen in their numbers ambushed and killed the harmless and innocuous people of Kishosho and Zirshe communities of Kauru LGA, Kaduna state,” he said. “One sustained some degrees of injury and has been hospitalized. The five Christians were killed at Kishosho and Zirshe villages. The herdsmen also attacked Kigam village and burned foods and grains.”

In Plateau state’s Miango area, in Bassa County, Fulani herdsmen on Feb. 2 ambushed and killed two Christians on a road in Dudu village, he said. Raphael Bawa, 39, was shot dead, while Aga Mabo was shot in the chest and later died at Enos hospital, according to Mali.

“In recent times, Fulani herdsmen have killed hundreds of our people, with thousands displaced, houses razed down and farmed crops destroyed, leaving behind 200 orphans and vulnerable children, as well as 50 women widowed,” he said.

Benjamin Habila was killed in the attack on the Government Science College, Kagara town in Rafi County, an area resident said.

“A Christian student, Benjamin Habila, was shot dead by the bandits as he tried to escape from them, while seven other Christian students and staffs were captured alongside other non-Christian students, staff and their family members,” Justina Aliyu told Morning Star News by text message. “They were taken away at gunpoint into forests.”

The gunmen, dressed in military camouflage, attacked between 1:30 a.m. and 2 a.m., reportedly gathering students outside and chasing and shooting those trying to escape, including Muslims.

A spokesman for Nigerian President Muhammadu Buhari said armed forces and police had been directed to ensure the immediate and safe return of those abducted.

Aliyu, a Christian resident of Kagara, said the assailants were Fulani who broke into the school, shooting and raiding the staff quarters and student hostels. The statement from the governor’s office identified some among those kidnapped as Christians Philip Dodo and his wife, Hannatu Philip Dodo, Christiana Adama, Faith Adama, Shem Joshua, Ezekeil Danladi, Habakuk Augustine and Polonius Vincent.

About 1,000 students were at the school at the time of the attack.

Country with Most Christians Killed

Nigeria was the country with the most Christians killed for their faith last year (November 2019-October 2020), at 3,530, up from 1,350 in 2019, according to Christian support organization Open Doors’ 2021 World Watch List. In overall violence, Nigeria was second only to Pakistan, and it trailed only China in the number of churches attacked or closed, 270, according to the list.

Nigeria led the world in number of kidnapped Christians last year with 990, according to the WWL report. In the 2021 World Watch List of the countries where it is most difficult to be a Christian, Nigeria broke into the top 10 for the first time, jumping to No. 9 from No. 12 the previous year.