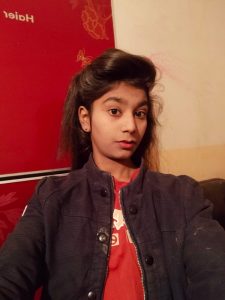 LAHORE, Pakistan (Morning Star News) – Johnson Masih and his wife Samina were shocked when police in Lahore, Pakistan told them their 13-year-old daughter, missing since Feb. 19, had converted to Islam and married a Muslim.

A few days after registering a missing person report with police on Feb. 21, the investigating officer summoned them to the police station and showed them a Nikahnama (Islamic marriage certificate) issued by a cleric from Okara District, said Masih, a member of the Church of Pakistan.

“He said that Shakaina was now a married Muslim woman and did not want to return to her family,” Masih told Morning Star News. “According to the Nikahnama, her so-called husband’s name is Ali Bashir. We haven’t heard this name before. Shakaina is just a kid. She was kidnapped and taken to Okara, where they forcibly converted her and conducted the fake marriage to give it a religious cover.”

Their daughter had worked with her mother as domestic help at bungalows in Lahore’s Valencia Town locality. When Samina Masih went to pick up Shakaina from a house on Feb. 19, the residents told her the child had already left.

The girl’s mother called her other employers, who all said Shakaina was not there. She then informed her husband, and after they were unable to find her, they went to police.

“The police did not pay heed to our request for registration of an FIR [First Information Report],” Johnson Masih said. “The FIR was finally registered two days later, on Feb 21.”

Intercourse with a girl below the age of 16 is statutory rape in Pakistan, but in most cases a falsified conversion certificate and Islamic marriage certificate influence police to pardon kidnappers.

Masih said police ignored his repeated pleas to meet with his daughter.

“It’s been over 20 days that our daughter is in the custody of unknown abductors, yet we haven’t been able to see her,” he told Morning Star News. “We were just handed a photocopy of the Nikahnama and told to approach the court if we wanted to meet her. They also refused to act when we showed them her official birth record, according to which she’s just 13 and five months.”

Attorney Rana Abdul Hameed said he had petitioned the Lahore High Court and filed applications with senior police authorities for Shakaina’s recovery, but that police showed no interest in the case.

“It is great injustice for the poor family,” Hameed told Morning Star News. “Their daughter is missing for the last so many days but there’s no information yet about her safety and well-being.”

He added that cases of forced conversion of minority children in 96-percent Muslim Pakistan were increasing due to connivance of police and judicial officials.

“Laws barring underage marriage are in place, but police do not apply them in the cases,” he said. “Moreover, sections related to rape and abduction are also ignored, which enables the perpetrators to obtain bail and walk free from the case. This prejudicial attitude is putting the security of all minority girls at risk and needs to end immediately.”

Masih, a sweeper at an office, said he would not rest till his daughter is recovered and returned to his custody.

“All hell has broken loose on us,” he said. “My family’s shattered, and each passing day adds to our misery. Is there no law or justice for poor Christians like us?”

Shakaina’s abduction adds to a list of growing cases of forced conversions and marriages of minority girls in Pakistan, particularly its Punjab and Sindh provinces.

A court in Faisalabad on Feb. 16 returned 12-year-old Farah Shaheen to her Roman Catholic father’s custody nearly nine months after she was kidnapped by three Muslims from the family’s home, raped, forcibly converted to Islam and forced to marry a 45-year-old man, according to the family.

Pakistan leads the world in forced marriages, with about 1,000 Christians married against their will to Muslims from November 2019 to October 2020, according to Christian support organization Open Doors’ 2021 World Watch List report. In terms of abductions, the report listed Pakistan as fourth with an estimated 100 kidnappings.

Though a parliamentary panel on minorities has forwarded key legislation to the government on curbing forced conversions of minority girls in Pakistan, Christian rights advocates say that lack of political will and courage to face pressure from Islamist groups is likely to keep the children vulnerable to such crimes.

The Stymie Forced Religious Conversion Bill forwarded to the Senate on Feb. 16 recommends that only adults should be allowed to change religion and only after appearing before a senior district judge.

“Last month the Senate’s Committee on Religious Affairs rejected a bill seeking protection for minorities against religiously motivated violence, including forced conversions and misuse of the blasphemy law,” she told Morning Star News. “Such draft legislation has previously also been opposed, which has emboldened perpetrators of this heinous crime, and we are now witnessing a record increase in cases.”

It takes months and sometimes years for minority families to recover their abducted children, Nasir said.

“Enough is enough,” she said. “It’s time that the political parties realize the consequences of this crucial human rights violation and do something worthwhile to end the sexual exploitation of the minority girls in the name of religion.”

According to the Center for Social Justice, 162 questionable conversions have appeared in the media since 2013. About 52 percent of allegedly forced conversions occurred in Punjab Province, and 44 percent in Sindh Province, while 1.23 percent each were reported in the federal and Khyber Pakhtunkhwa areas. One case was reported from Balochistan Province.

The data show that 54.3 percent of the girls and women were Hindu, 44.4 percent were Christian and 0.62 percent belonged to Sikh and Kalash communities.

Pakistan ranked fifth on the World Watch List of the 50 countries where it is most difficult to be a Christian.