Christian Mother of Three Beaten, Driven from Home in India

Christian Mother of Three Beaten, Driven from Home in India 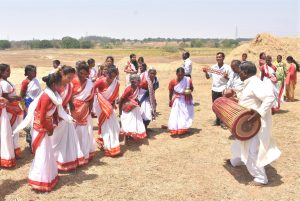 The next morning, Feb. 10, an officer from Lesliganj police station in Jharkhand state’s Palamu District came to her village and accused her of disobeying the family elders and disrespecting their religious sentiments, said 26-year-old Mantu Devi, mother of children ages 7, 3 and 2 in Chapi village.

“He told me that my father-in-law should have beaten me to death,” Devi told Morning Star News. “He told me that I am putting up a drama for Jesus Christ, warning me, ‘Why will you not bow before tribal deities? We will book you under stringent laws and send you to jail, only then will your mind start functioning properly. You will know your limits then.’”

Devi told the officer that her relatives had threatened to behead her, and that she would not give up her faith at any cost, she said.

Later her husband, Sunil Oraon, returning from his work in Kerala state, spoke by phone to officers at Lesliganj police station, he said.

“The officers at Lesliganj police station told me over the phone that I would be [expletive deleted] to death, and that I am inviting destruction upon myself,” Oraon told Morning Star News. “I told him, ‘Sir, yes, if I had committed a crime then definitely, but I have not done any crime.”

Devi said police summoned the couple to the police station on Feb. 10 and threatened to file criminal charges against them, and that she and her husband told them they would follow Christ until the last breath of their lives.

Police at the Lesliganj station switched off their phone when Morning Star News called to try to obtain comment.

Devi and her children have been living in a doorless shed in the woods, and villagers have barred them from getting water from the community well, she said.

“The children and I walk two miles every day to fetch water,” Devi told Morning Star News. “Since it is summer [which begins in March in India], we need more water, and the utensils and cans we have are not sufficient to store water. We have to go out to fetch water twice or even thrice a day.”

The Jharkhand coordinator for legal advocacy group Alliance Defending Freedom India visited the family on March 6, assured them of legal assistance, she said.

Homelessness came after Devi’s father-in-law, Jageshwar Oraon, became enraged at her objection to him sprinkling the blood of cattle throughout her house as part of a tribal religious ritual, she said.

“The stink causes nausea,” Devi said. “Worried that my boys might fall sick, I requested him not to sprinkle the blood in the house. He was enraged, saying I had hurt his religious sentiments, and started abusing me in extremely filthy language. He blasted that I had driven his son and grandchildren to accept Christian faith and had defiled his entire household.”

Previously, in the absence of her husband while he worked as a daily wage earner in southern India, her father-in-law and other relatives had forced her children to participate in their witchcraft and worship of nature, she said.

“Recently he brought some idols home and has been spending time in the company of Aghoris, devotees of Hindu deity Shiva,” she said.

As her father-in-law grew angrier, Devi phoned her husband and informed him that his father was threatening to behead her. He told her to try to keep the children safe from him until he could return.

“But my father-in-law had been adamant that we must also partake in the rituals he performs,” she said. “When I refused to concede to his demands, he charged at me with bamboo sticks and beaten me up very badly. I was crying, screaming in pain and pleaded with my mother-in-law to stop him, but she too was supporting her husband.”

Other relatives declined to come to her rescue, she said.

“They were all on one side inciting him to strike me with the bamboo, and I was alone with nobody to speak up for me,” Devi said. “I was praying in my heart, ‘Lord please give me the strength to endure, even if I die, may my death be for your glory.’ I told my mother-in-law that she can’t stop her husband from striking me, that’s fine – but he can’t lay hands on my children.”

Before becoming a Christian, Devi had lost three children – a miscarriage and two who died as infants – and she and her husband had spent much of their income on treatment in hospitals or for travel to religious sites to seek the help of various deities, her husband said.

“Despite all the efforts, we lost three children; my wife’s health also deteriorated,” Oraon told Morning Star News. “Then our older one and I fell sick. There was no one to take care of us. The villagers would direct us to the rituals in the village and force us to believe that they can make us well, which further disturbed our family with evil spirits taking us captive.”

Immediately after hearing the gospel from a co-worker in Kerala, Oraon put his faith in Christ, he said.

“I called Mantu and told her that only Jesus Christ can heal us,” he said. “I shared the gospel with her, and she too had put her faith in Christ. For three years, we secretly prayed in our home and did not share with our family or community members that we had put faith in Christ.”

He took his wife and first-born son to a church in Kerala, and Devi told him she had peace in her heart after the pastor laid hands on them and prayed for them, Oraon said. Returning to their home in Jharkhand, they could not keep their faith secret any longer.

“As we refused to partake in rituals and customs followed by my parents and relatives, they were able to figure out that we must have renounced our former faith,” Oraon said. “They called the village elders and humiliated us publicly. Out of the 70 houses in Chapi village, at least 10 of the houses have one or more members of the family who secretly join us for worship at our home.”

Oraon said he plans to return to Jharkhand in April, when they hope to construct a shack for temporary shelter.

On March 13, Oraon’s mother and other villagers came to Devi’s shed in the woods and struck her with bamboo sticks, accusing her of stealing grain from the home where she had lived with her in-laws.

“When they had beaten me up and expelled us from home [on Feb. 9], we packed some food grains so that we could survive until my husband returned,” she said. “We are staying in a shed along with cattle, buying vegetables and essentials. I do not have enough money to provide a proper meal for my children.”