Legacy of a Hard-Working Fighter for Religious Freedom

Legacy of a Hard-Working Fighter for Religious Freedom 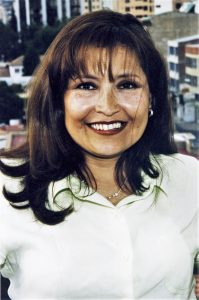 COCHABAMBA, Bolivia (Morning Star News) – Until her death last month at the age of 63, Bolivian attorney Ruth Montaño had done perhaps more than any living person to advance the rights of religious minorities in her Andean homeland.

A specialist in constitutional law and permanent legal counsel to the National Association of Evangelicals of Bolivia (ANDEB, in its Spanish acronym), the Cochabamba-based lawyer spent more than two decades defending Christian believers and congregations against discrimination and injustice.

Her greatest professional accomplishment was undoubtedly the passage in September 2019 of Religious Liberty Law 1161.

Montaño served as chief legal architect of the landmark legislation, “one of the greatest achievements of the evangelical church and ANDEB in our country’s history with respect to religious freedom,” said ANDEB President Munir Chiquie.

The product of nine years of research, litigation and negotiation with the government of former president Evo Morales, the Religious Liberty Law guarantees the independence of churches and other faith communities from government interference in their internal affairs.

The law prevents secular officials from dictating how non-Roman Catholic churches must organize their activities, choose leaders and manage their finances. It also reestablishes the right of churches and mission organizations to open and maintain schools, clinics and other holistic social ministries, a right that had been denied them for nearly a decade.

According to Chiquie, the most important provision in Law 1161 was the creation of a new legal identity for churches, synagogues, mosques and other faith communities. These groups now enjoy official status as “religious organizations.”

“This law established a whole new judicial environment for religious organizations,” Chiquie said. “It recognizes their freedom to preach, to teach the Word and to use mass communications media. Also, it guarantees the freedom to conduct religious education in accordance with their respective worldviews.”

The sweeping changes came about in part because of a move by the Morales government eight years ago to exercise strict control over the country’s non-Roman Catholic churches.

In 2013, Bolivia’s Plurinational Legislative Assembly passed Law 351 For Granting of Juridical Personality to Churches and Religious Groups. In response, ANDEB filed legal motions with the county’s Constitutional Tribune seeking annulment of the legislation.

Montaño, who spearheaded the legal appeal, argued that Law 351 granted the government excessive power to interfere in the internal affairs of churches and mission agencies. Compliance with Law 351, she said, “Would force churches to betray their true ecclesiastical traditions. This measure deprives them of any autonomy to follow their original faith convictions.”

Despite ANDEB’s constitutional challenge and marches that mobilized an estimated 20,000 protestors in five cities, Morales-appointed judges upheld Law 351. That setback, along with the government’s insistence that pre-Columbian animistic rituals be observed in schools and other public spheres, galvanized church leaders to press energetically for a new law guaranteeing religious freedom.

“It gave me gray hairs,” she said. “It was a huge task to build consensus among evangelical pastors. We would finish a draft in one part of the country and take it to another area for review. They would say, ‘No, no, no, we should do this instead.’

“It became apparent that some church leaders had misconceptions about what religious liberty truly is. We discovered attitudes that were discriminatory against other religions. We had to explain that freedom for some means freedom for all.”

In the end, it was largely Montaño’s credentials as a constitutional lawyer and her unrelenting pursuit of justice that brought the project to completion.

“Ruth was a warrior,” Chiquie said. “She had a passionate heart for God, completely honest, direct and sincere in everything she did.”

“She was like a lioness, a fierce woman when it came to working for just causes,” he said. “Utterly plainspoken, she went and told highly placed government officials exactly what she had to say. Sometimes other lawyers and representatives would tell her, ‘Calm down, Ruth, they might get upset with us.’ But she always spoke with respect and professionalism, asking them to do the right thing.

“That is how I will remember her, for her work ethic and her impeccable conduct.”

The petite mother of two had other passionate interests. In her later years, she dedicated a portion of her time to protecting the family, representing Bolivia before sessions of the Organization of American States to testify on the impact of public policy on reproductive rights, the status of women and the education of minors.

Yet Montaño never declined to help anyone who asked for her help, often working pro bono.

“She served as legal counsel to many evangelical denominations and organizations across the country,” Chiquie said. “She would help any person who sought her out, regardless of who they were, and plead their case with all her heart and skill.”

In September 2020, exactly one year to the month after the passage of Religious Liberty Law 1161, Montaño was diagnosed with cancer of the stomach. She passed away at her home on Feb. 12, survived by two adult sons, Lenz Mauricio and Jorge Luis, her elderly mother and three siblings.

“It is not going to be easy to replace her,” Chiquie said. “It will not be easy for others to take up her mantel and do the things she did.”

The post Legacy of a Hard-Working Fighter for Religious Freedom appeared first on Morningstar News.