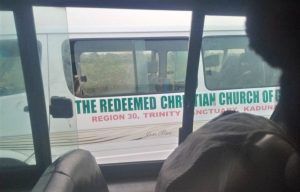 JOS, Nigeria (Morning Star News) – Christians in Kaduna state, Nigeria suspect Muslim Fulani herdsmen were behind the kidnapping of eight Christians from a bus in the southern part of the state on Friday (March 26).

The members of the Redeemed Christian Church of God (RCCG) were traveling from the city of Kaduna to Kafanchan when their bus was intercepted on the Kachia-Kafanchan highway 63 kilometers (39 miles) southeast of the state capital, Kaduna city, according to reports.

“Please pray for my dad and other RCCG missionaries who were kidnapped by Fulani herdsmen on the evening of Friday, March 26,” church member Ifedun Richard told Morning Star News by text message on Saturday.

Eje Kenny Faraday, who was also traveling along the Kaduna-Kachia highway on Friday, on Friday (March 26) posted a photo of the church members’ abandoned bus and stated that they had just been kidnapped.

A spokesman for the RCCG in the city of Kaduna, pastor Olaitan Olubiyi, confirmed the kidnapping, saying the eight church members were on their way to Kafanchan for ministry outreach.

Tanko Makeri, a resident of the area where the kidnapping took place, told Morning Star News by text message that the church members were kidnapped at gunpoint along the Kaduna-Kachia highway between Doka and Makyali villages.

“We are appealing to the government and security agencies to do everything within their power to rescue the victims,” Hayab said in a press statement on Saturday (March 27).

A spokesman from the Kaduna State Police Command said officers are investigating.

“We received report from the Divisional Police Officer in Kajuru area about the incident, and we have commenced investigation on it,” Mohammed Jalige said in a text message to Morning Star News.

A senior pastor at RCCG headquarters in Lagos, Leke Adeboye, released a statement saying a service by Zoom was organized for Sunday (March 28) for its churches around the world to pray for the release of the captive church members.

Nigeria led the world in number of kidnapped Christians last year with 990, according to Open Doors’ 2021 World Watch List report. In the 2021 World Watch List of the countries where it is most difficult to be a Christian, Nigeria broke into the top 10 for the first time, jumping to No. 9 from No. 12 the previous year.

Nigeria was the country with the most Christians killed for their faith last year (November 2019-October 2020), at 3,530, up from 1,350 in 2019, according to the WWL report. In overall violence, Nigeria was second only to Pakistan, and it trailed only China in the number of churches attacked or closed, 270, according to the list.