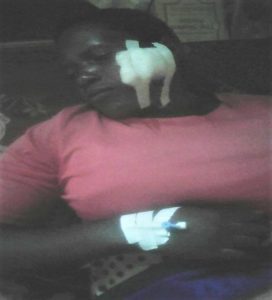 NAIROBI, Kenya (Morning Star News) – A mother of seven children in eastern Uganda suffered serious wounds and is cut off from her family after her husband and other Muslim relatives attacked her on Easter Sunday for putting her faith in Christ, sources said.

Salimati Naibira, 37, of Bukoba B village, Mayuge District, lost consciousness after her husband cut her with a dagger known as a Somali sword in the thigh and back on April 4 as she attended a worship service for the first time in the area, she said. She had converted from Islam to Christianity three days prior.

Naibira said she was on her way to the church service when she met her brother-in-law, Ahirafu Kowa, who asked her where she was going. He likely became suspicious after she told him she was going to visit a friend, she said.

One hour into the worship service, Naibira said, she saw through a window that her husband and other relatives were approaching.

“I saw my husband, Ayubu Kairu, and some family members enter the church gate shouting ‘Allah Akbar [jihadist slogan ‘God is greater’],’” Naibira told Morning Star News. “The church members took off from church worship to save their lives.”

The Muslim relatives entered the church building with sticks and the Somali sword. Naibira said the pastor and some church elders tried to protect her but were overpowered, and the assailants forced her into a van and drove her to a nearby forest.

“They started beating me with sticks, then my husband cut me with the Somali sword at the thigh and the back,” she said. “I regained consciousness only after several hours.”

A passing herdsman found her lying in a pool of blood at about 3 p.m., and he and others took the still unconscious Naibira to a clinic in nearby Kityerera town.

On April 5 hospital staff members managed to make contact with a friend of Naibira, and on April 8 she picked her up from the hospital. At this writing Naibira was at an undisclosed location recovering from wounds on her face, thigh and back.

On April 1 Naibira had been visiting the friend’s workplace in Kaluuba town, telling her how doctors had not been able to give her any relief from heavy menstrual bleeding for four years, she said. A Christian evangelist arrived, told her about Christ and asked if he could pray for them, Naibira said.

“I shared with him the fear which had tormented me of the flow of blood that had troubled me for four years,” she said. “He said that Jesus is a healer, and that with Him all things are possible. As he prayed for me, I felt something like an electric power touched my body.”

The evangelist also prayed for the needs of her friend, unidentified for security reasons. Hearing that God’s love was revealed in Christ’s sacrifice for sins, Naibira received Him as Lord and Savior, she said. The evangelist told her to visit any nearby church for fellowship and to celebrate the resurrection of Christ on Easter Sunday, April 4.

“Before leaving my friend, I was full of joy,” Naibira said. “At night I got a dream of watching a film of Jesus crucified on the cross.”

She awoke with a feeling of excitement, and the issue of blood had stopped, she said.

Naibira said she does not see how she can gain custody of her children, who range in age from 4 to 17 years old. She said she cannot return home.

“I hope my children are safe,” she said.

The assault was the latest of many instances of persecution of Christians in Uganda that Morning Star News has documented.

Loving your enemies in the Middle East: Fact or fiction?